Building the leadership and management capacity within their senior teams has always been a focus of scaleup CEOs, however through the support provided by the ecosystem to address this challenge it is now showing signs of being a demand more fully met. There remain gaps in provision particularly when accessing support from networks of peers, mentors and non-executive directors. It also remains clear that Scaleups most value support when it is delivered at a local level.

Developing the senior team through training (70%) remains the top factor that scaleup leaders feel will aid their growth, alongside individual development though they are also seeking to augment their teams by strategic recruitment of top-level talent (54%). However, they are increasingly looking for support from non-executive directors (56%).

DEVELOPING SKILLS IN THE LEADERSHIP TEAM IS THE PRIORITY OF SCALEUPS, ALONGSIDE SOURCING NEDS AND ACCESSING NETWORKS OF THEIR PEERS

LOCAL SUPPORT IS VITAL; PEER NETWORKS AND NEDS ARE IN DEMAND

Four of ten all scaleup leaders believe that most of the available money and business advice is in London and the South East. Scaleups value sources of support that are local and while the perception that support is more London/South East centric has declined slightly since 2019, significant regional disparities persist which demonstrates the need for further evolution of the scaleup ecosystem around all parts of the UK.

Six in ten scaleup leaders want access to a cadre of non-executive directors with experience of growing a business. Gaining easier access to a network of peers is seen as vital or very important by many scaleup leaders, with 5 in 10 ranking peer networks as a critical factor in their growth. There is scope for large corporates to take a greater leadership role in providing connectivity for their supply chains – only 16% of scaleups are part of a formal network or structured peer group with others in the supply chain. However, a further 58% are involved in informal networks or desire to be part of a formal peer group representing a significant opportunity for large corporates to step up and meet this demand.

Local support from financiers and universities is also a key requirement. 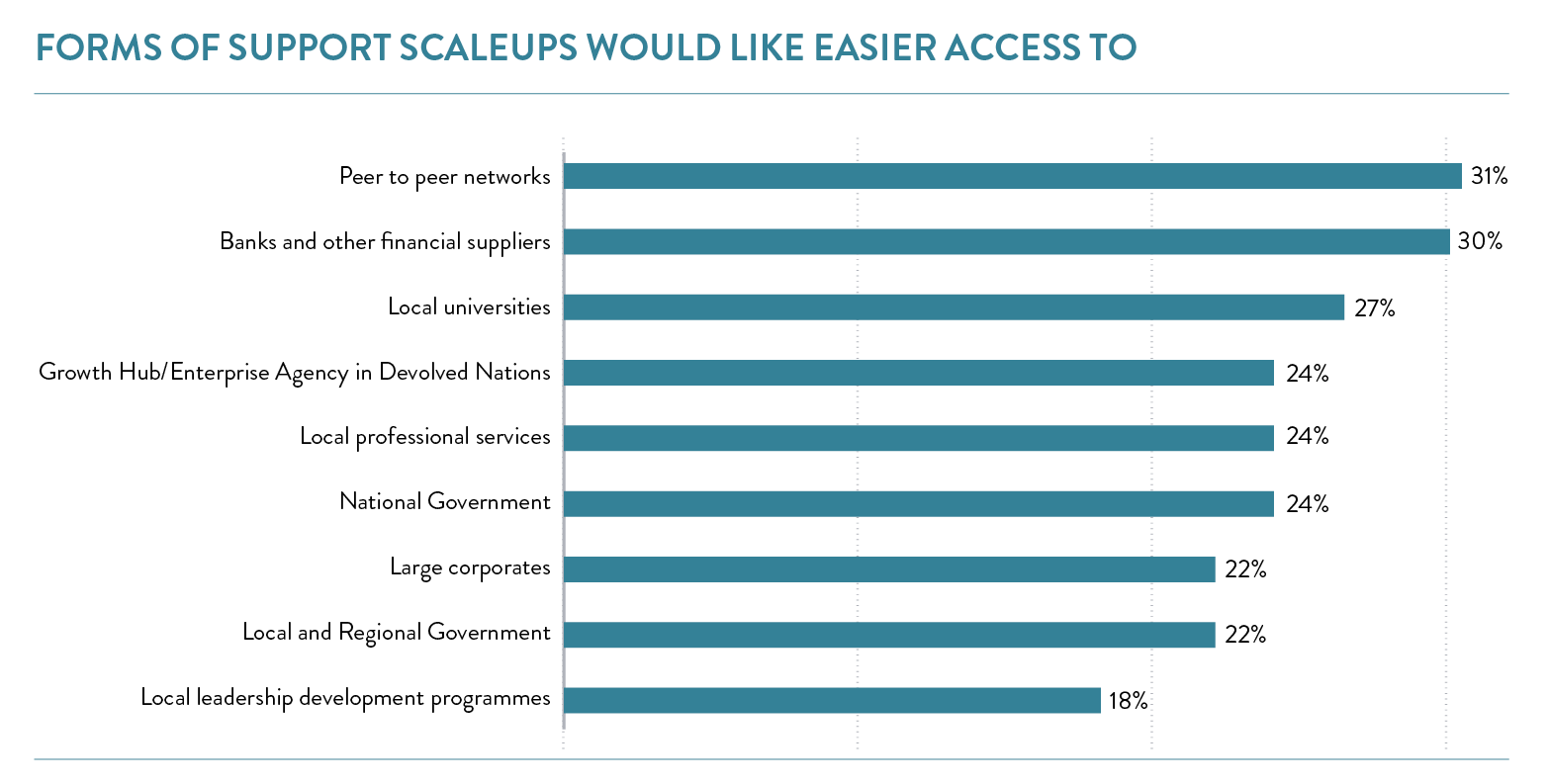 Six out of ten scaleup leaders have a mentor who provides guidance and support to senior management. The vast majority of leaders with a mentor find their guidance valuable (91%). While some leaders feel that they do not need a mentor, of the 40% who do not currently have such a relationship, finding a suitable mentor remains the biggest issue.

In terms of public sector support, in 2020, scaleups again cite R&D and innovation support as most vital, while also highlighting the value placed on local support entities such as Growth Hubs and development agencies in the Devolved Nations. 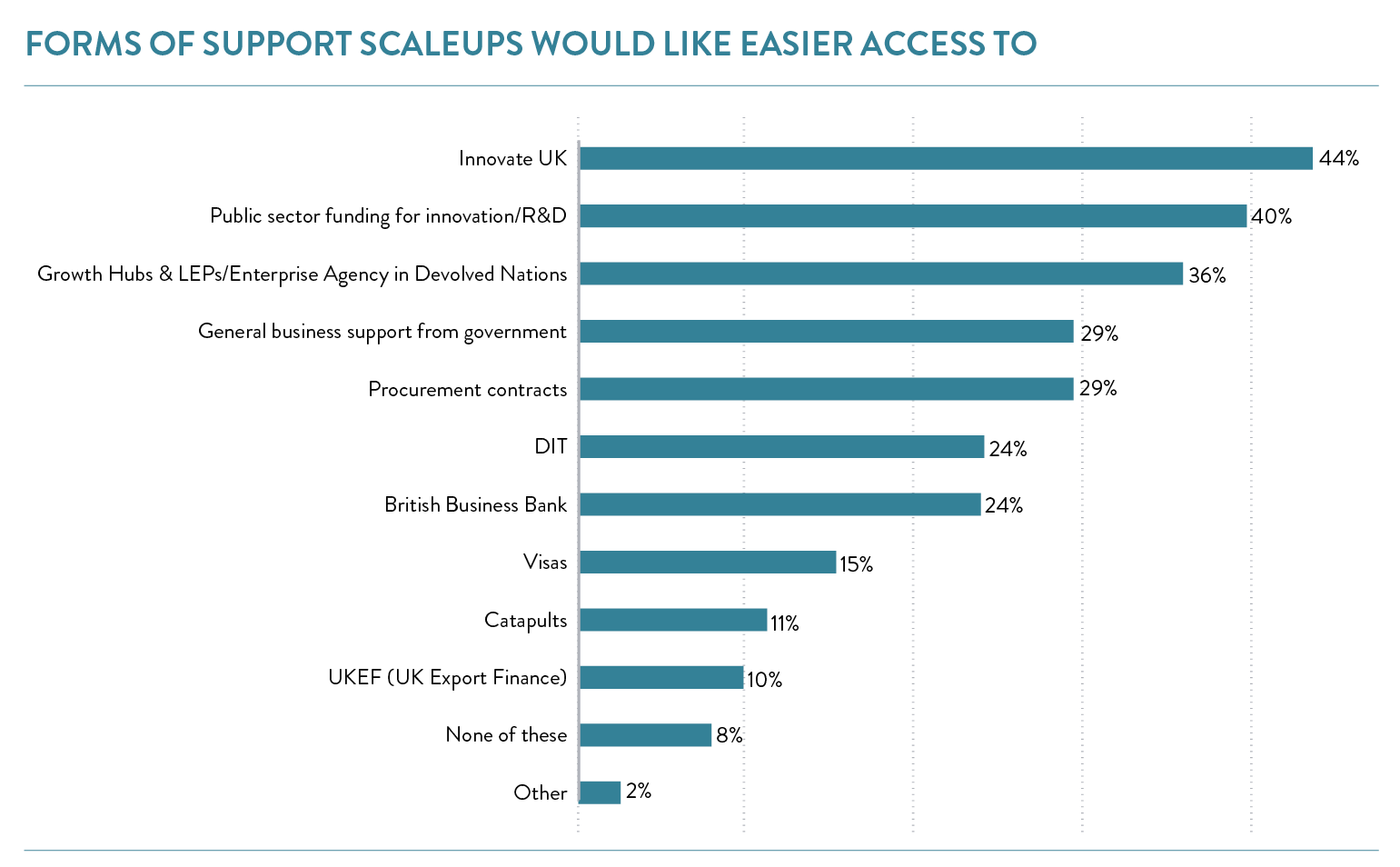 Support for innovation is critical

Scaleups are highly innovative. To support their endeavours to create new products, services and processes they are increasingly looking for support from key government agencies like Innovate UK. This is now the number one ask from our scaleup leaders with almost half (44%) seeing their support as vital or very important. In addition, four in ten want public sector funding for innovation and R&D.

Maintaining access to innovation and R&D funding schemes provided by the EU, or replacing these with similar homegrown offerings, is seen as very important to six in ten scaleup leaders. Such schemes often facilitate innovative longer-term projects.

Scaleups are also seeking greater access to facilities and expertise that support innovation from universities and large corporates. Six in ten scaleups consider such access at universities is vital or very important, however in the past three years only three in ten have collaborated with universities or research institutions to develop a new product or service. Five in ten want access to corporate facilities.