Core to the ScaleUp Institute’s mandate is to work with others to grow and share the evidence available about scaling businesses in the UK. With accurate and timely analysis of more data, local communities and authorities, LEPs, regions, and stakeholders from the private and third sectors will be better able to target interventions that remove the barriers to scaleup growth.

The ScaleUp Institute undertakes detailed analysis of ONS data against three elements of the OECD high-growth (scaleup) definition1. These are:

Importantly, this growth has taken place across the country. For the first time ever, all regions of the UK are experiencing a growth rate of greater than 1 additional scaleup per 100,000 of population. On average, scaleups are 42% more productive than their peers. Encouragingly, we continue to see scaleup numbers increase across the breadth of the economy.

Whilst this growth rate in scaleup numbers is encouraging, it is crucial to note that the rate of growth has slowed from its average annualised rate of 9.3% between 2013 and 2016. Preliminary ‘snapshot’ data from the ONS provides an initial indication that 2018 may have seen a decline in the number of scaleups in the UK.

As this constitutes the first full year of data since the EU referendum of 2016 we will watch closely to see how the decision to leave the EU has affected scaleup confidence, their ability to scale and the ecosystem’s ability to evolve to meet scaling businesses needs. Given the importance of EU backed funding to the current scaleup ecosystem, the UK itself must find mechanisms to maintain this support. 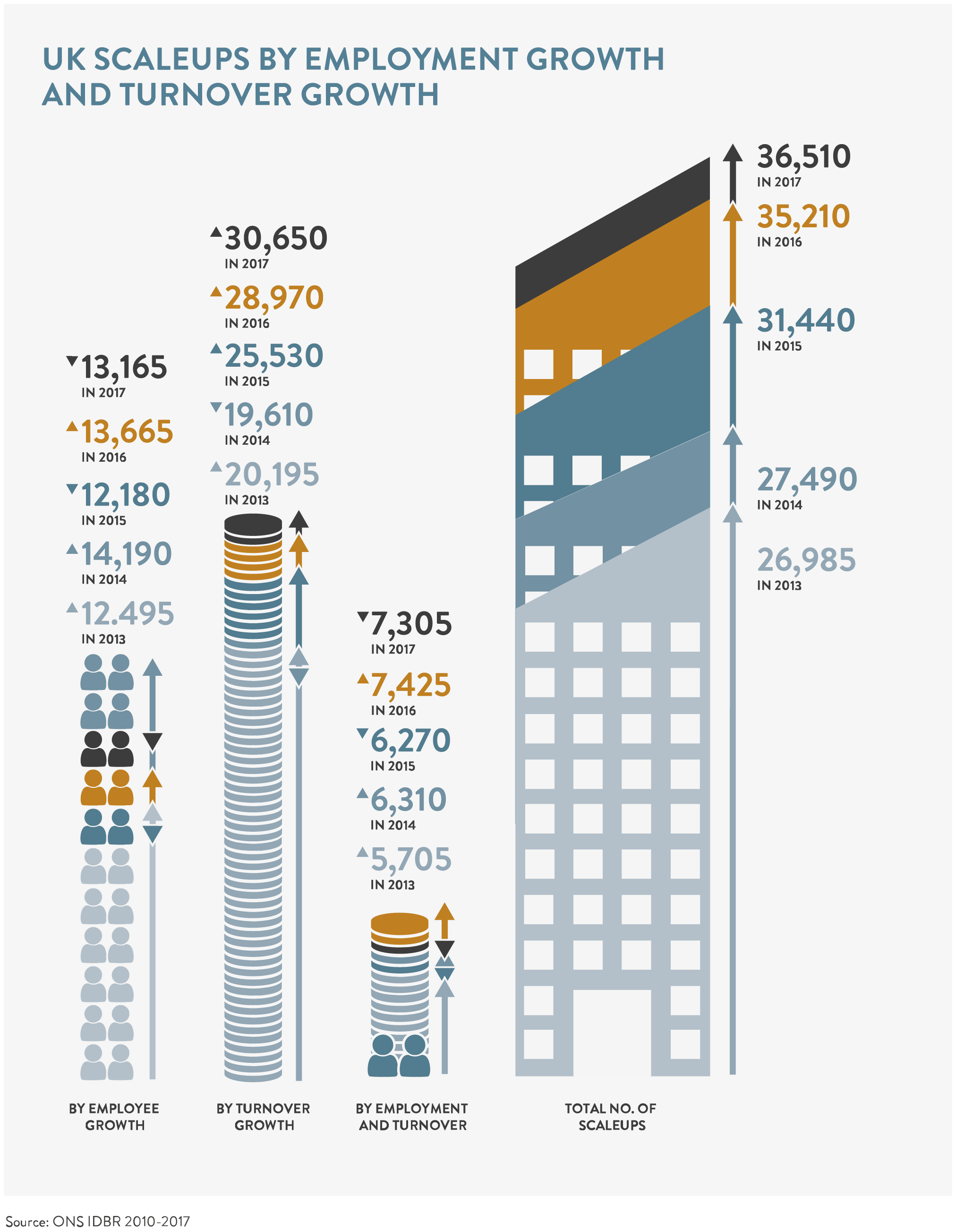 At a national level, the value that scaleups contribute to the UK economy remains substantial. Scaleups employed 3.4 million people in 2017, generating a total turnover of £1.3 trillion for the UK economy – for an average turnover per employee of £380,000, according to the ONS the total SME turnover in 2017 was £1.9 trillion. Scaleups are the vital 0.6% of our 5.7 million SMEs contributing nearly 70% of SME turnover output: emphasising the critical need for segmentation and tailored policy, solutions and services for scaling firms in our public, private and education sectors. 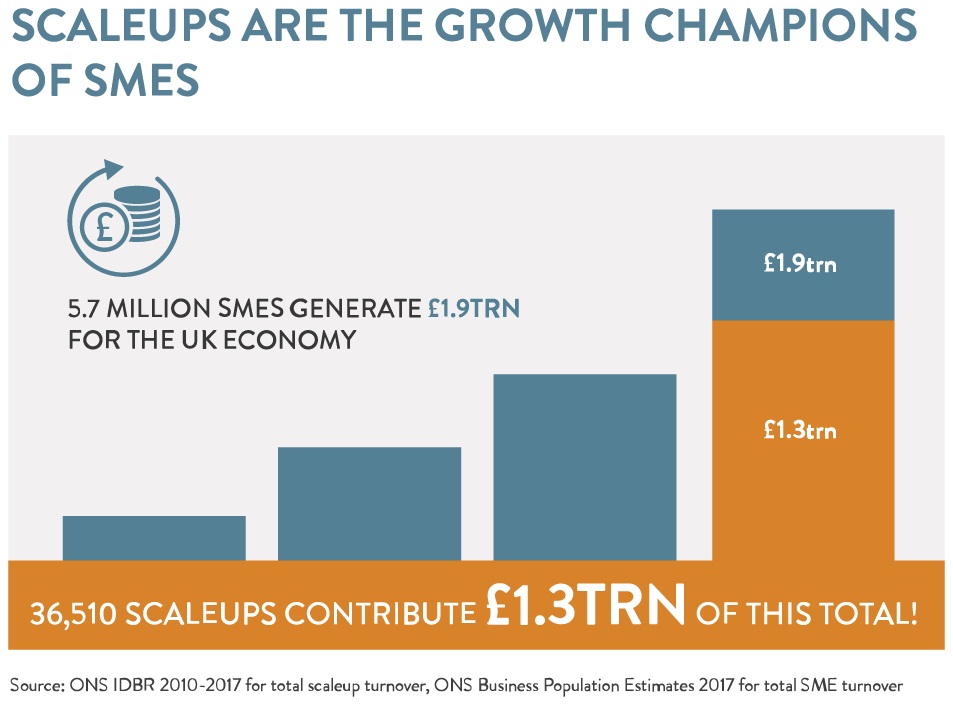 Using sectoral data from the ONS, we can see which sectors were responsible for the greatest scaleup growth. This data continues to show how scaleups in the UK exist across a broad range of sectors, with the Professional, scientific and technology sector showing the largest gains. Health and social work, the largest sector for scaleups, saw a slight decline in 2016-17 (following a large increase in 2015-2016). 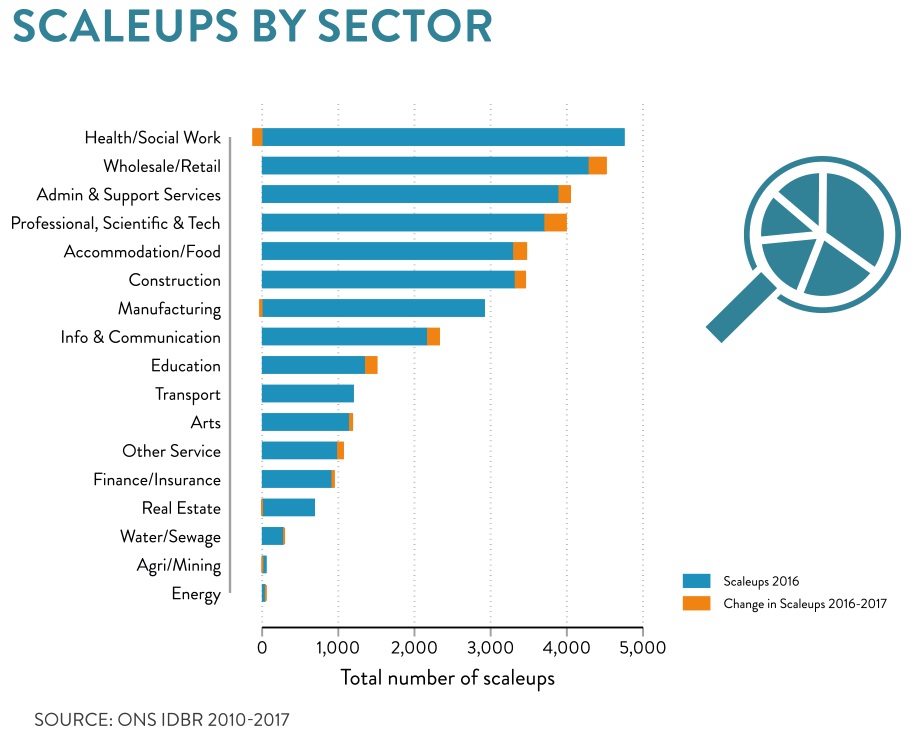 Scaleups are more productive than their peers across almost every sector 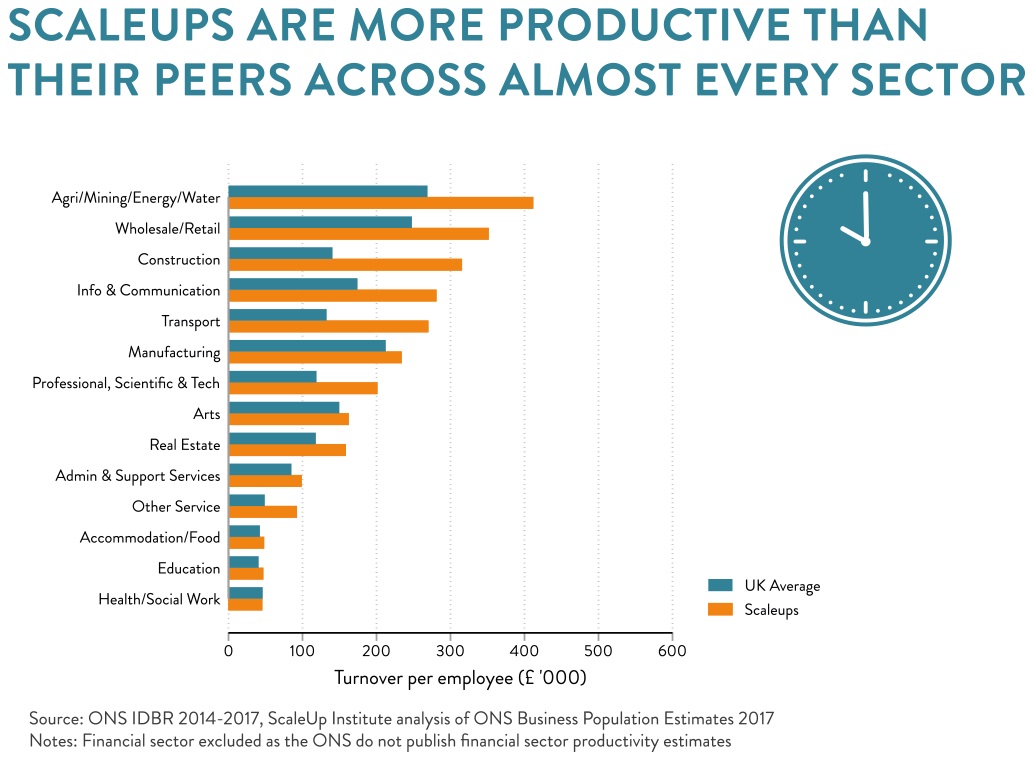 Scaleups keep scaling: the lifecycle of a scaleup

In 2019, the ScaleUp Institute has conducted analysis on longitudinal datasets held by the ONS, allowing us to track individual firms over time, and get behind the nature of scaleups and how they grow. This data allowed us to look for the first time at how frequently firms scale, their typical size and growth characteristics, and their turnover.

Using the Business Structure Database, a longitudinal dataset containing information on more than 99 per cent of economic activity in the country, we followed and analysed the UK’s scaleups since 2001, looking at the way they have scaled, their turnover and the number of employees they have. ‘Scaling’ here refers to a three year period where the growth rate exceeded 20% per year on average, allowing overlapping periods. 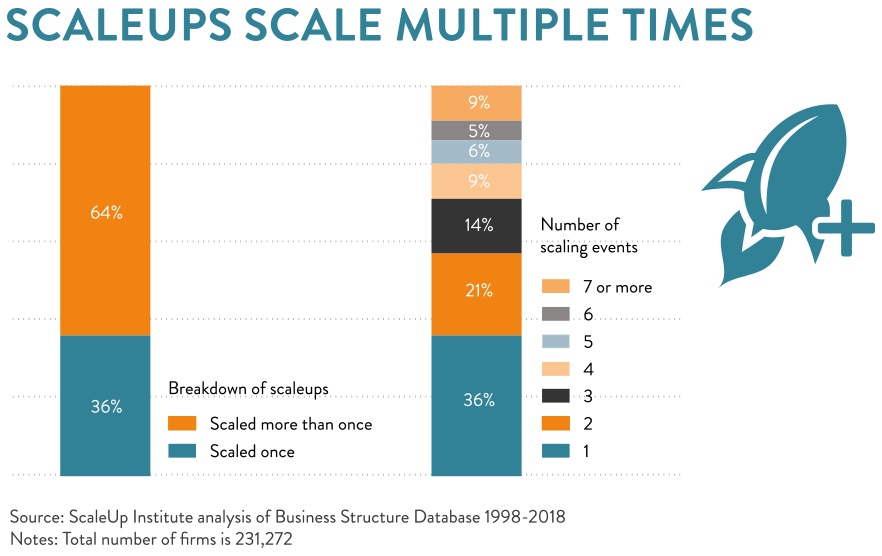 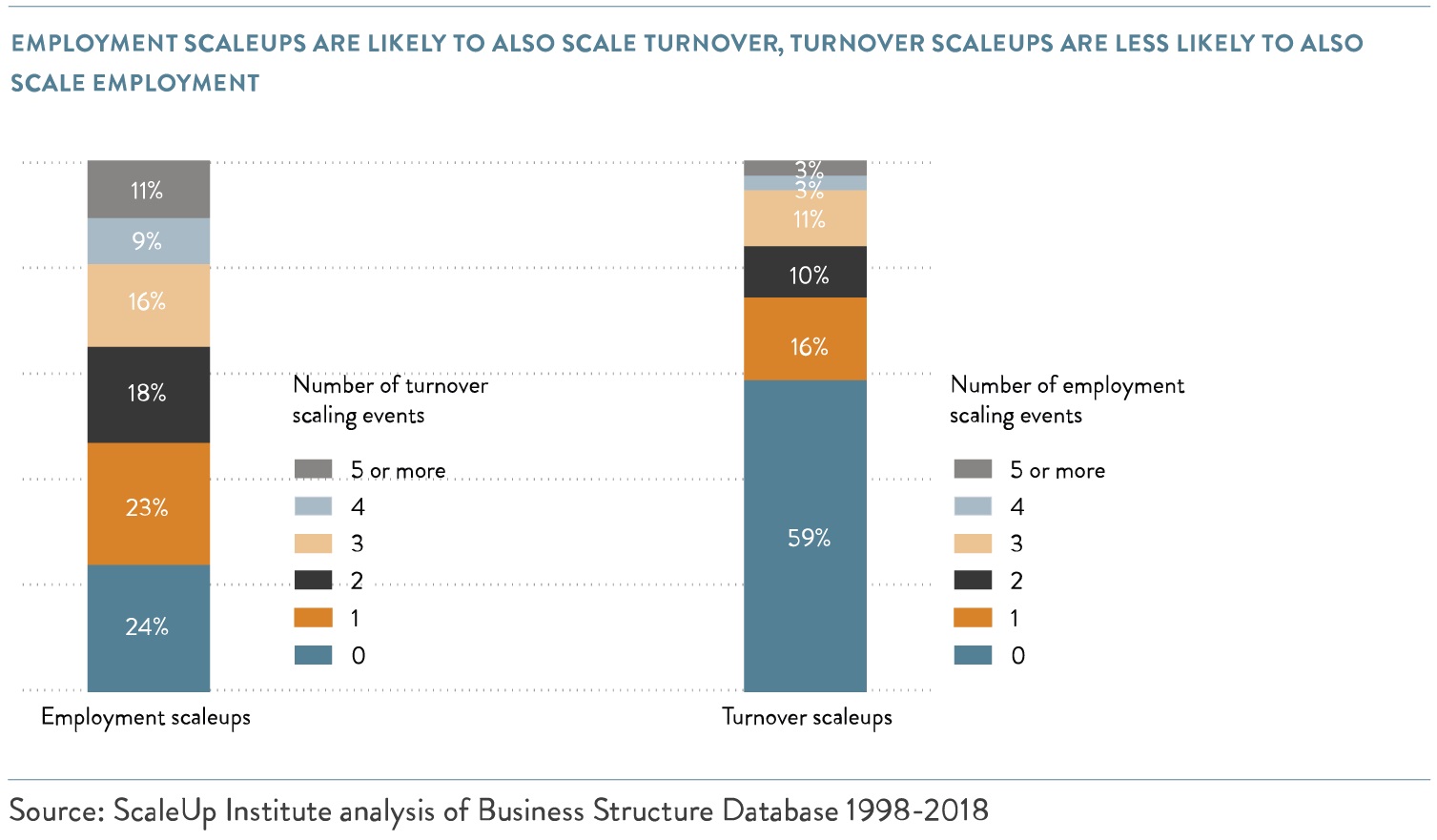 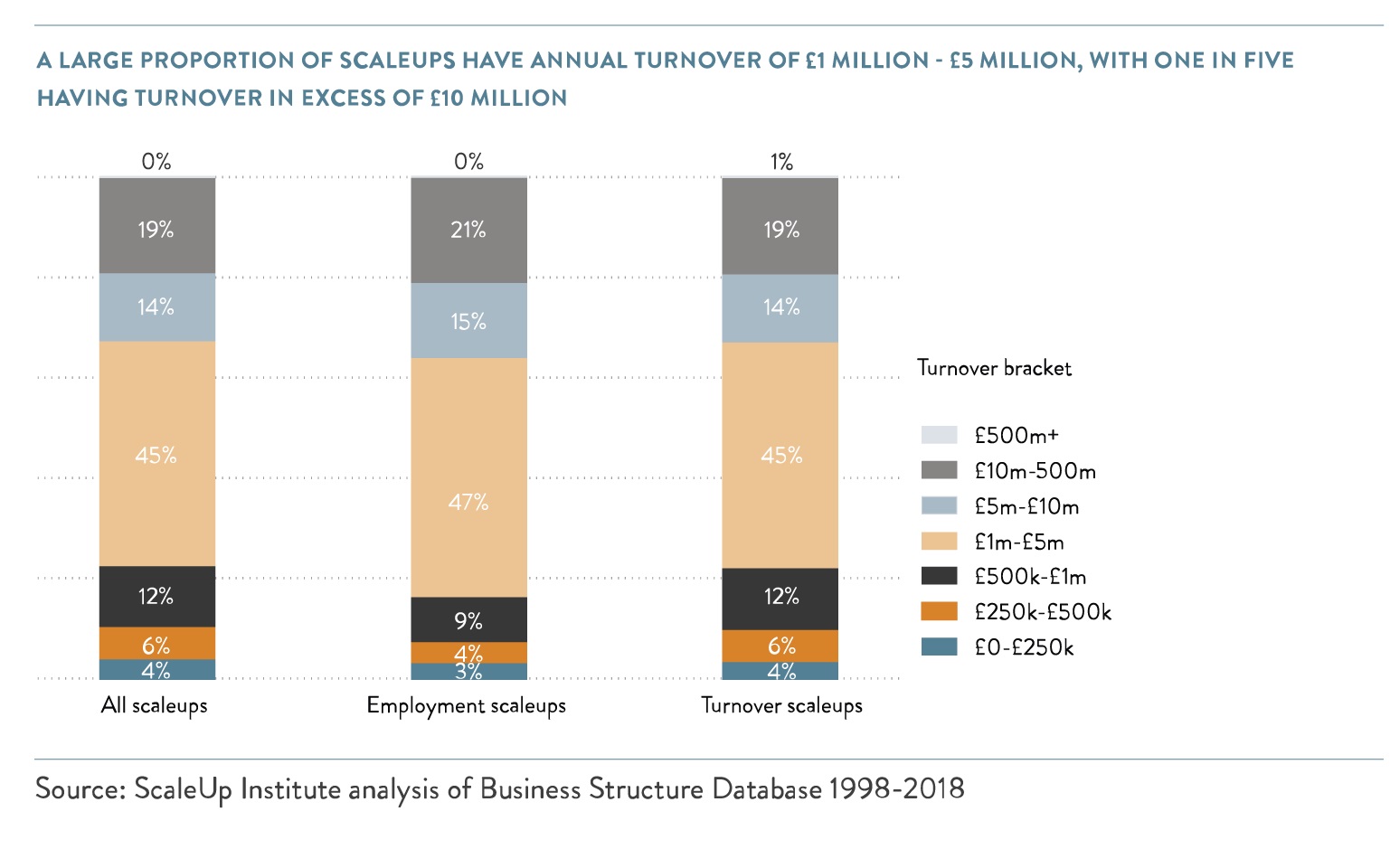 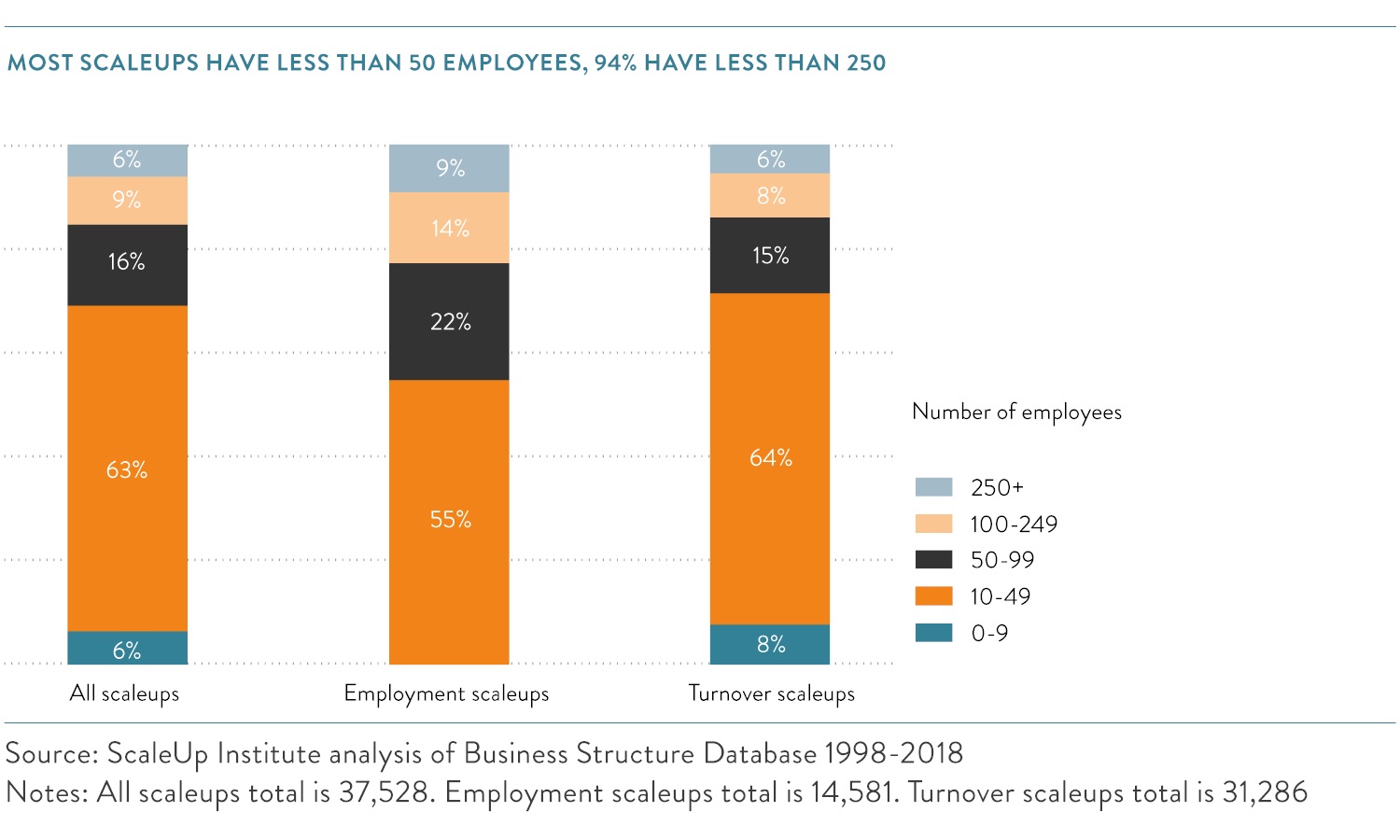 Alongside these national dynamics, it is important to highlight the significant local variations in scaleup success.

The growth in scaleups at a local level is illustrated in the maps below, with areas of a more fertile green exhibiting higher growth and areas of blue showing slower growth or decline in scaleup populations. Relative to last year, there are fewer regions of slower growth, and the areas of highest growth are now Oxfordshire and York, North Yorkshire and East Riding. 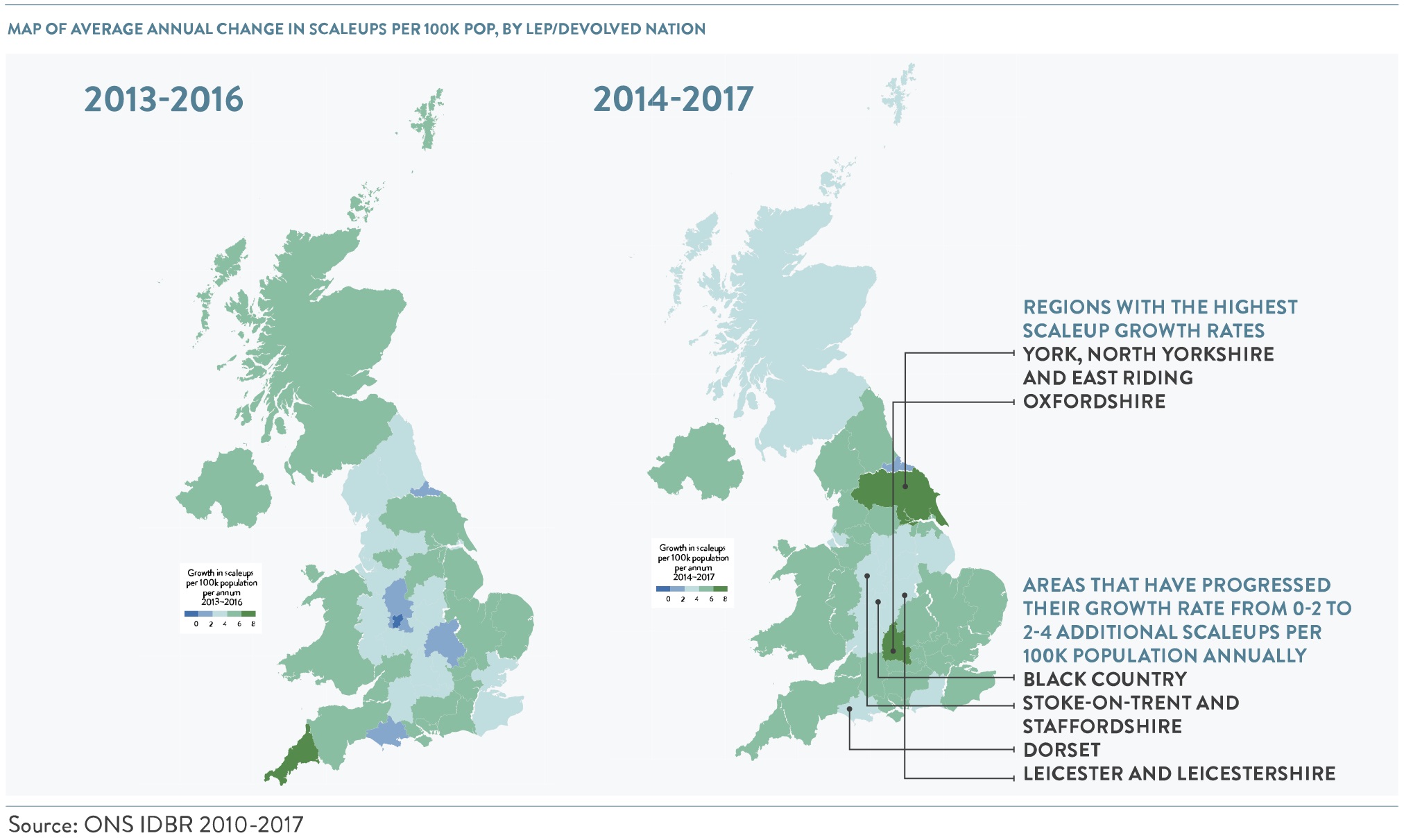 The maps below show the variation in the absolute number of scaleups, adjusted for population. This highlights the continued development of high scaleup populations in the South East of England, as well as the North East’s recent progress in increasing its scaleup population. 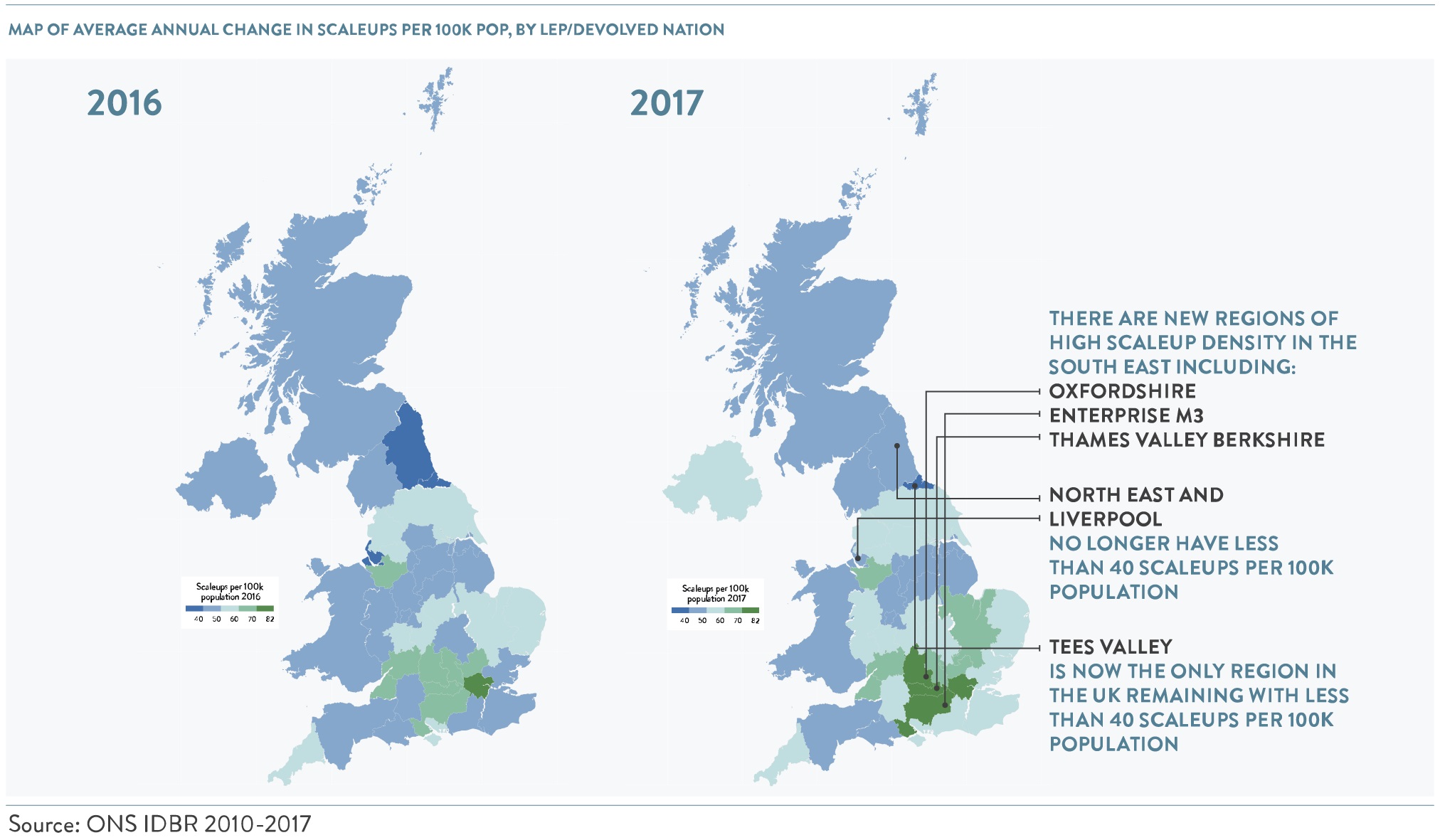 Looking across the 38 LEPs and 3 devolved nations, 2017 data shows significant changes across the UK. The table below shows how the growth rate in scaleups has changed, highlighting that in 28 out of 41 local areas the growth rate has increased relative to its 2013-2016 rate.

Whilst there has been movement within the table, the leading local areas remain broadly the same as last year. The main trends are:

To get behind the socioeconomic links to these changes, we have conducted an initial analysis of the underlying factors surrounding scaleup growth which is summarised overleaf. 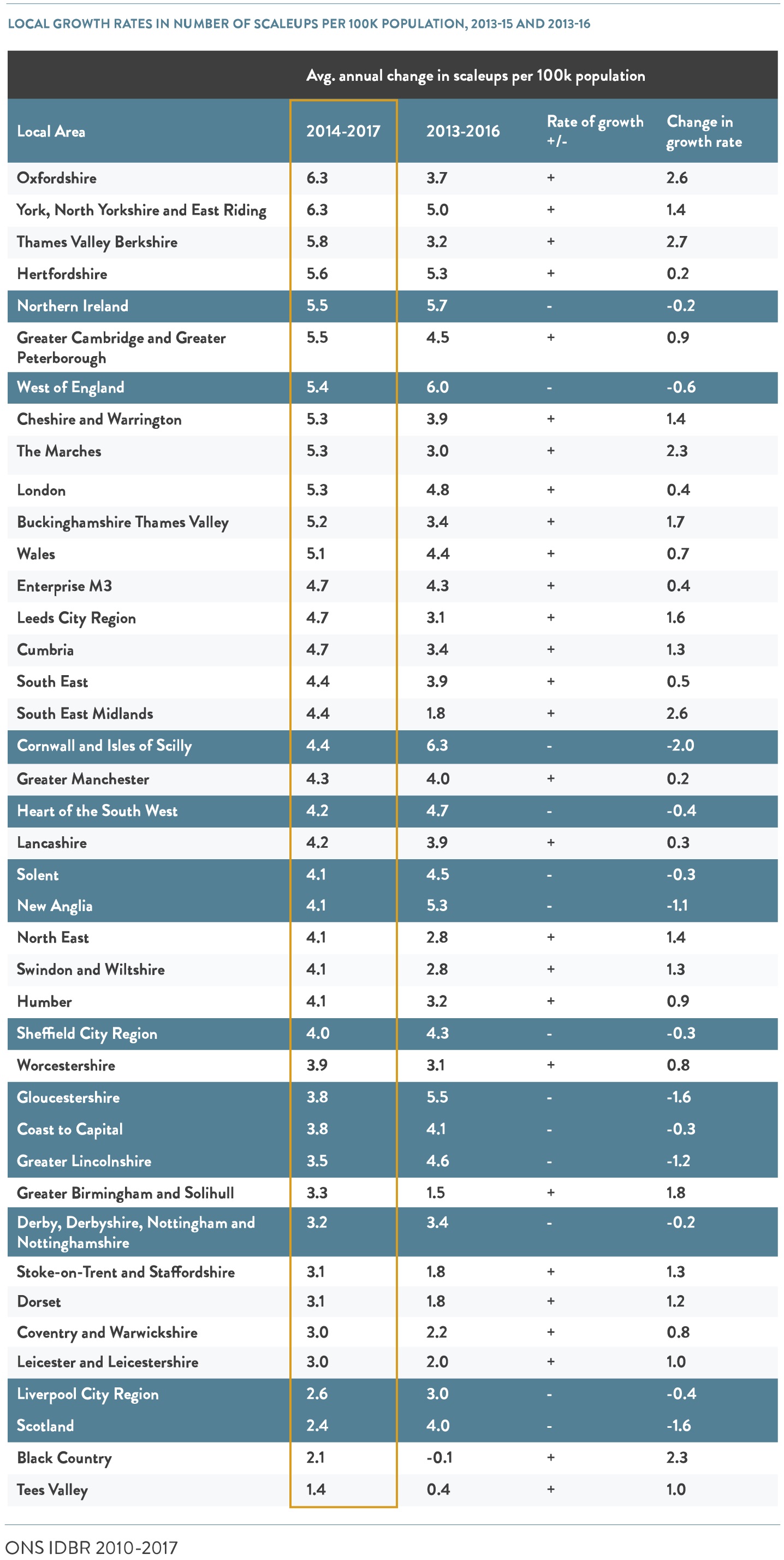 The latest data shows that there are no scaleup ‘cold spots‘ – local areas showing annual growth of less than one scaleup per 100,000 of population. However, some regions are only marginally above the threshold and variation in scaleup growth across the LEPs persists. Much more remains to be done. 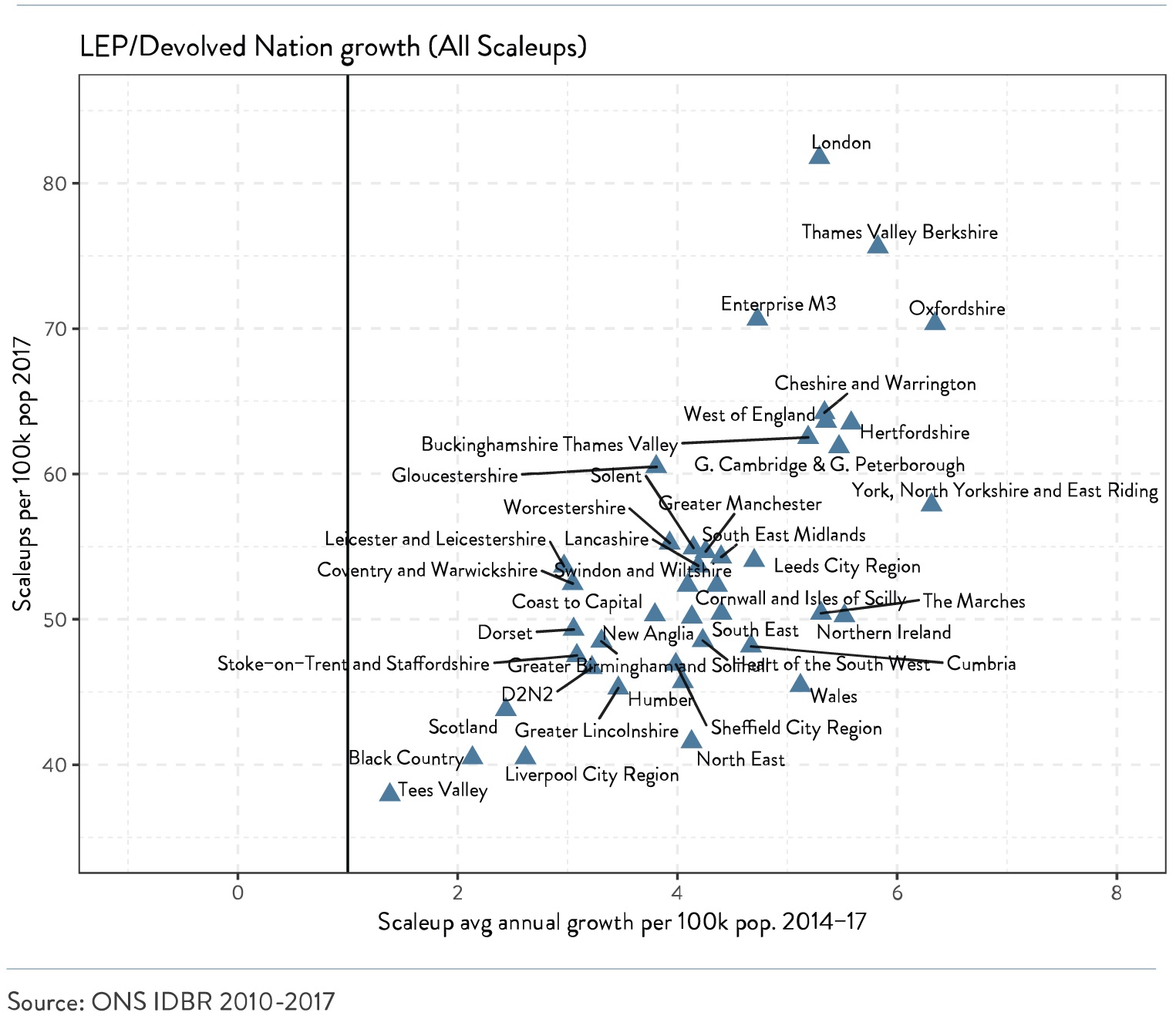 The top 5 LEPs for growth in turnover scaleups were Buckinghamshire Thames Valley, Thames Valley Berkshire, York, North Yorkshire and East Riding, Cheshire and Warrington and London. The top 5 LEPs/devolved nations for growth in employment scaleups were Oxfordshire, Swindon and Wiltshire, Greater Cambridge and Greater Peterborough, Northern Ireland and Hertfordshire, although growth in employment scaleups has been relatively weak, with only Oxfordshire growing at a rate of greater than +1 scaleup per 100k population per annum. These growth rates and scaleup densities for local authorities are shown in the charts below. 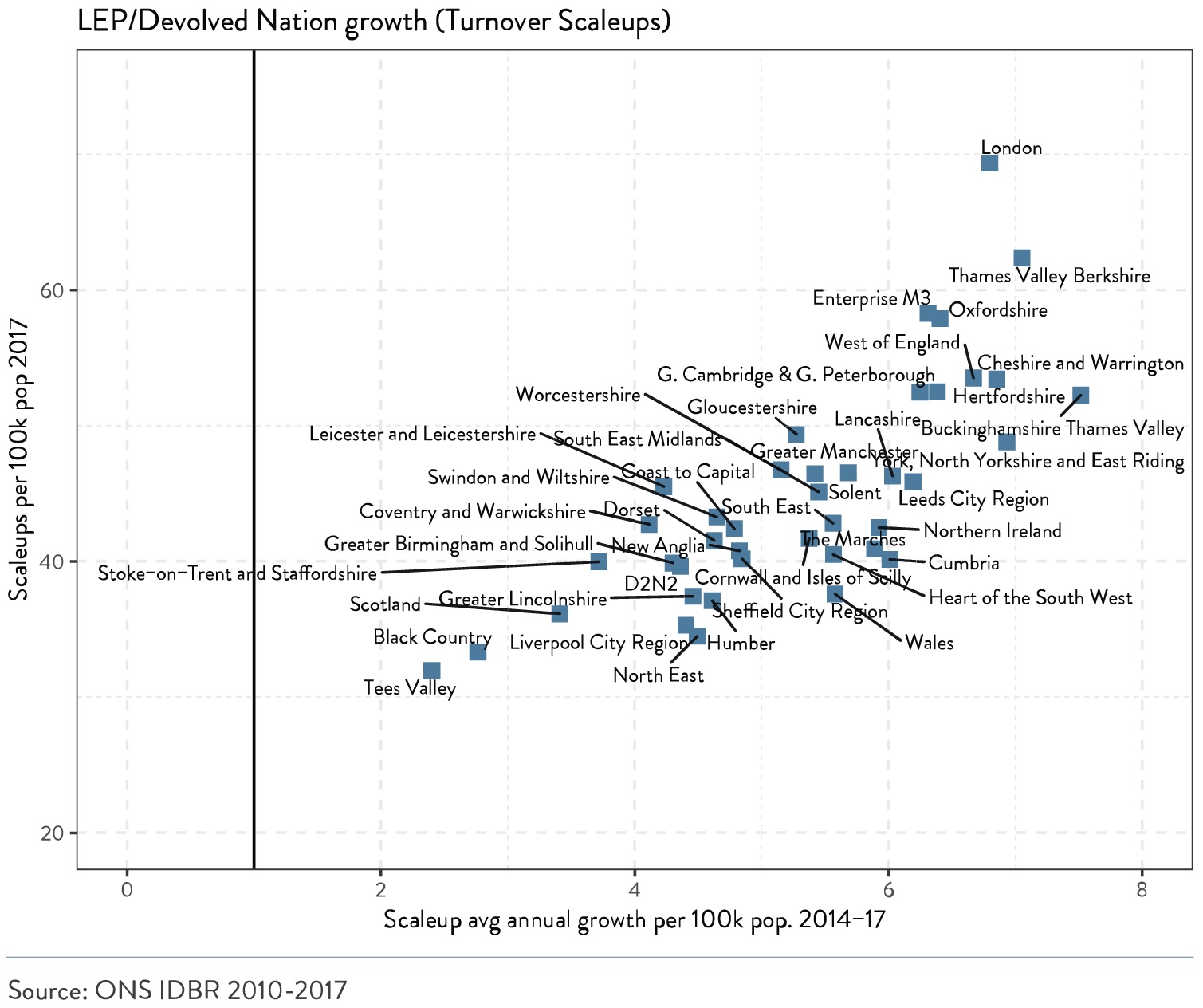 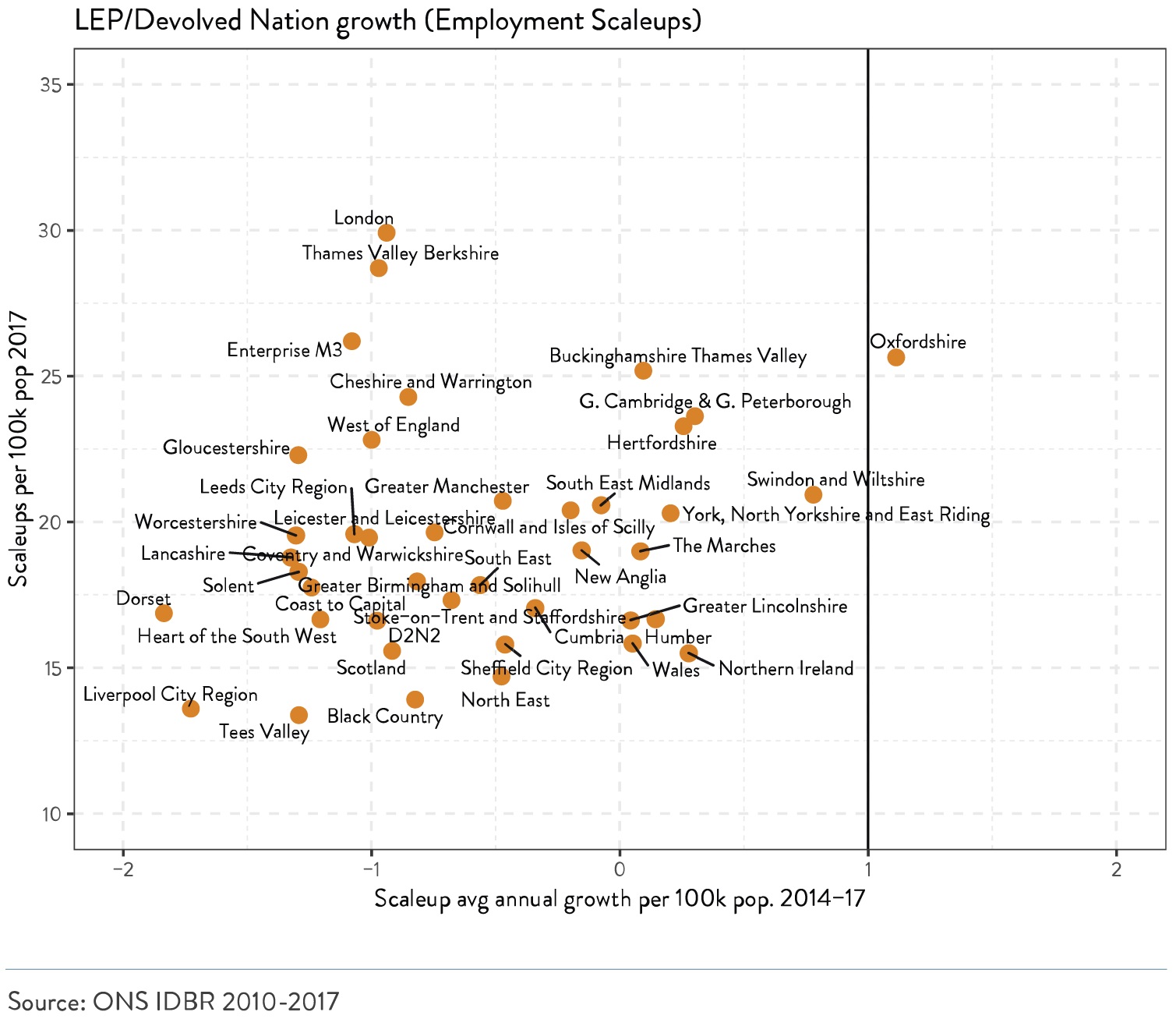 Looking at an even more granular Local Authority level, further regional disparities are highlighted. The number of scaleups per 100,000 of population varies widely among local authorities – from less than 20 in the Isles of Scilly, West Somerset, West Dunbartonshire and Clackmannanshire to more than 100 in Winchester, South Bucks and several local authorities in London. The figure below plots the number of employment and turnover scaleups by local authority against the growth rate.

Across the UK, none of the 381 local authorities had more employment scaleups than turnover scaleups. The median growth rate and density for turnover scaleups has increased substantially since last year (shown by the dashed and solid blue lines in the chart below) while there were declines in the media density and growth rate for employment scaleups. 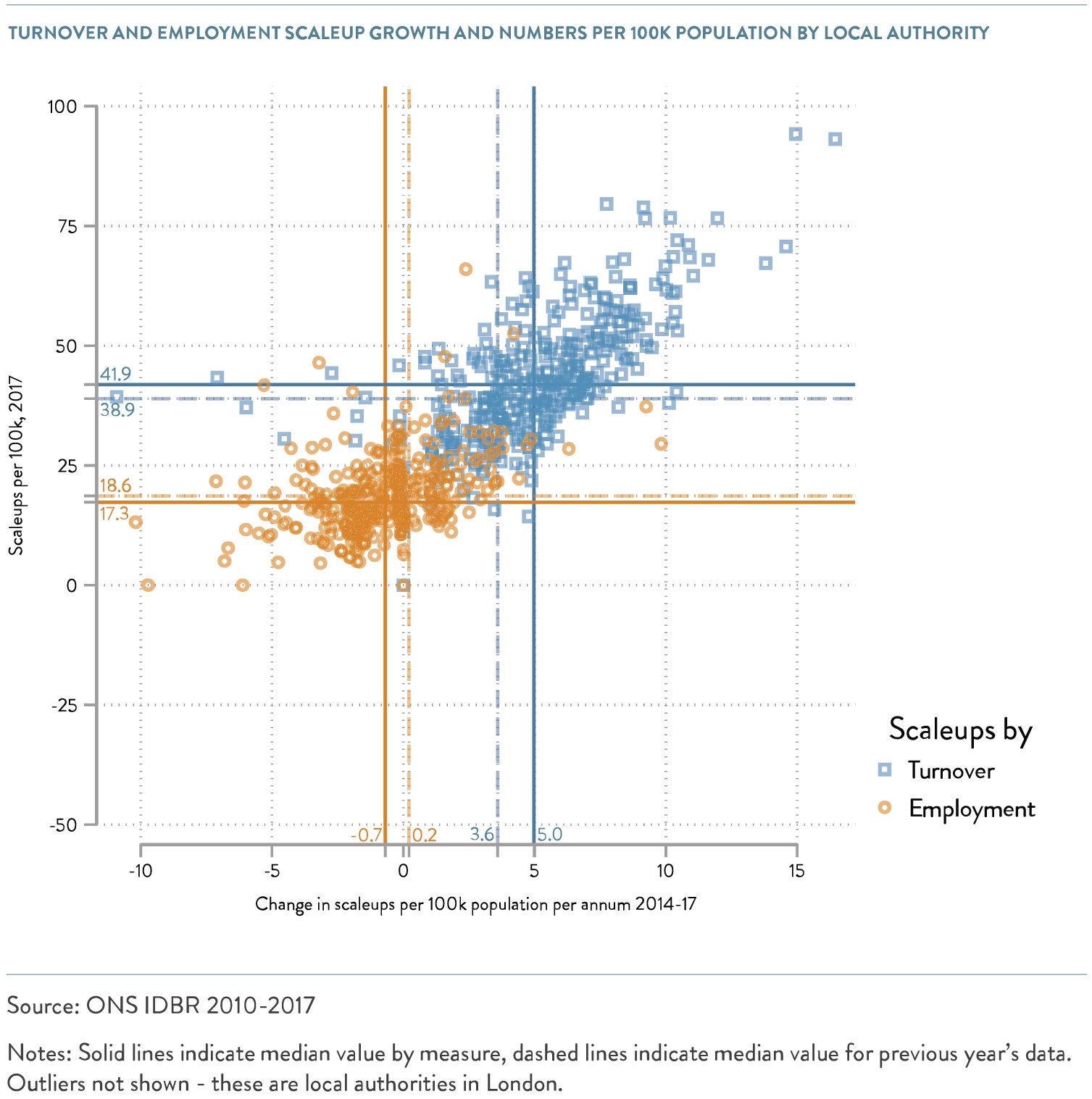 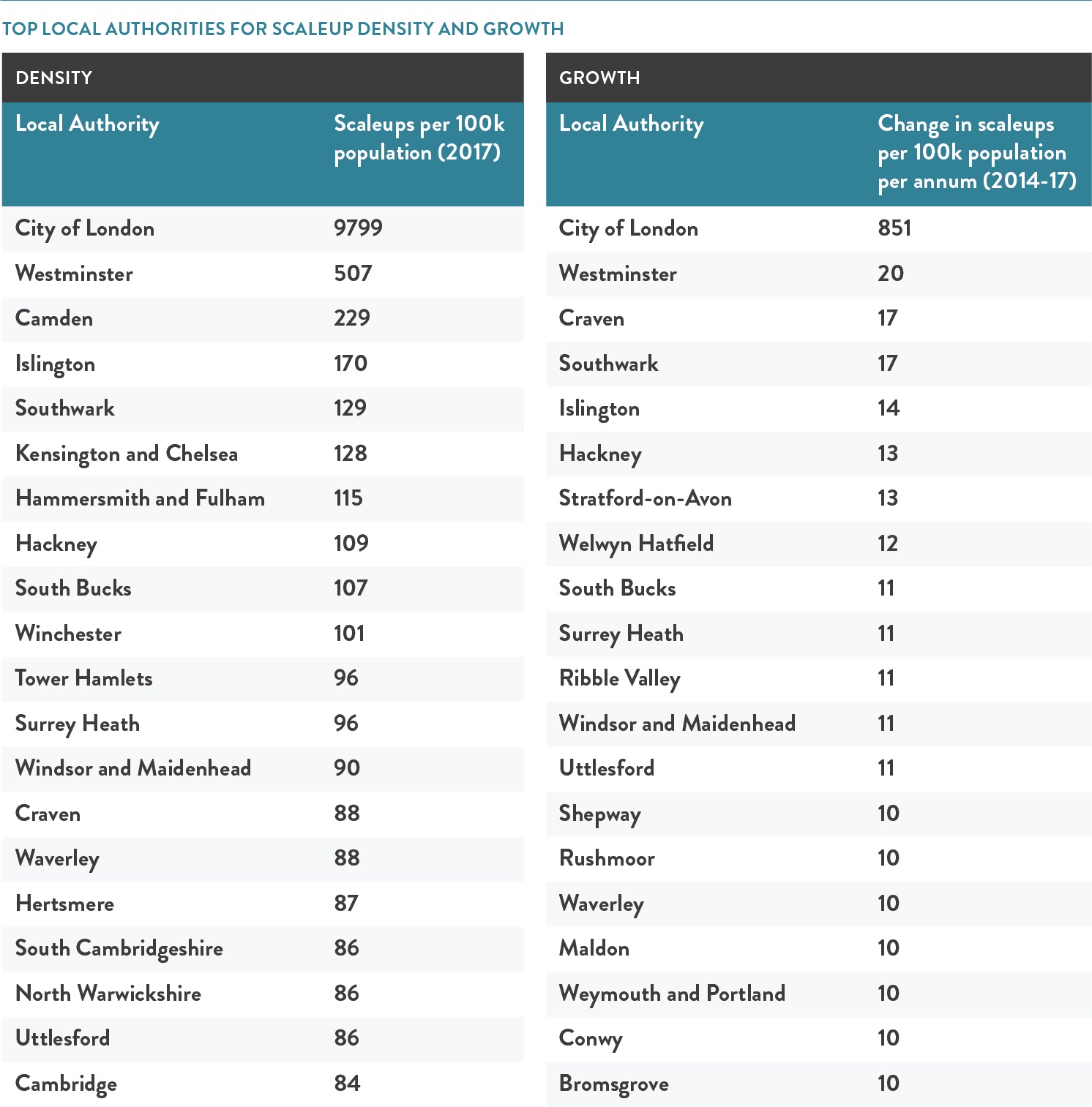