The ScaleUp Institute with the collaboration of the Office for National Statistics has undertaken a detailed analysis of the ONS 2019 data – the most recent available – against three elements of the OECD high-growth (scaleup) definition. These include the following:

In 2021, the ScaleUp Institute has continued to explore the trends in the data on scaleups and on the scaling pipeline, who are growing their turnover and/or employee headcount by between 15 and 19.99%. We present new insights on sectoral clusters of scaleups around the country and trends over time for the scaling pipeline.

Analytical note: In 2021 the boundaries between 17 LEPs in England were adjusted to remove overlaps between areas that have existed since their formation. The data presented in the local analysis below reflects the new boundaries published by ONS in October 2021. This has resulted in some changes to absolute number and density of scaleups found in the affected LEPs and therefore in these cases local results are not comparable with numbers published in previous Annual ScaleUp Reviews which are based on former LEP boundaries. UK-wide scaleup numbers and trends are unaffected by these changes.

This slowdown of scaleup growth is the result of a 10% drop in the number scaling by employment and a 9% drop in the number scaling by both employment and turnover. Although the number of scaleups growing by turnover remained steady in 2019 at 27,565 – 1% above the 2018 figures – this small decline in the overall number of scaleups may reflect ongoing global uncertainty as well as the intensifying Brexit dynamics and the rising concerns among scaleups around market access. 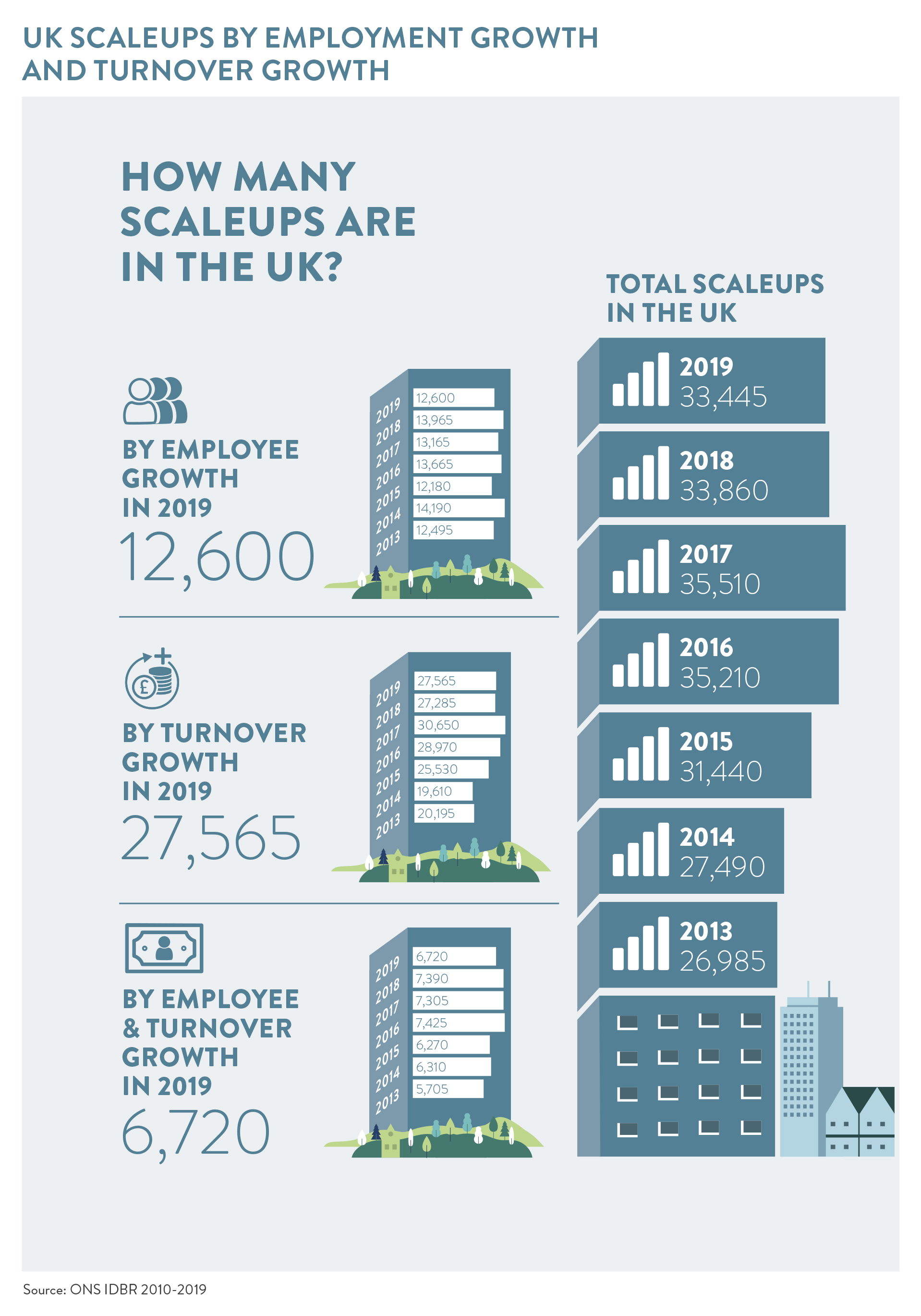 Scaleups continue to represent 50% of the total SME turnover output despite making up less than 0.6% of the SME population: this reinforces the critical need for segmentation and tailored policy, solutions and services for scaling firms in our public, private and education sectors.

Scaleup numbers are 24% above the 2013 total and in the period up to 2019 they have outperformed the economy and the broader universe of all SMEs. Over the same six-year period GDP has grown by 12% and the number of SMEs has grown by 20%. The chart below compares the growth in GDP and the growth in the number of scaleups with 2013 as the base year.

Scaleups span the breadth of the economy

Scaleups continue to be across all sectors of the economy.

The ONS data shows that the largest four sectors by numbers of scaleups in 2018 remained the same in 2019. The sectors that made the biggest absolute gains in numbers of scaleups in 2019 were Wholesale/Retail and Information & Communications. Manufacturing saw the next largest increase in 2019, making it the fifth largest sector. However, there were slowdowns in Health/Social Work and Construction scaleups. 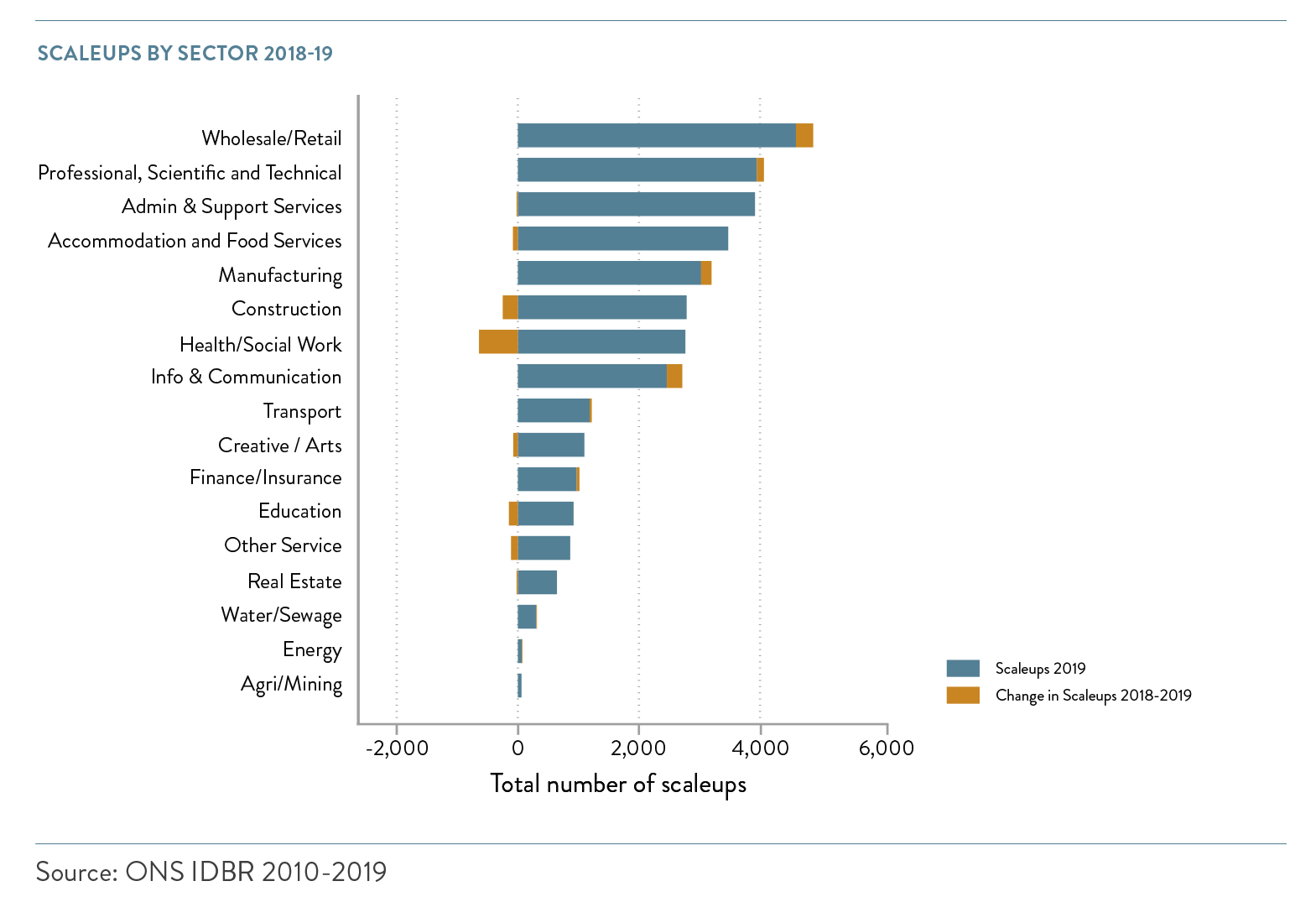 On a longitudinal basis looking at sectoral trends from 2013 to 2019, Accommodation and Food Services saw the largest absolute gain in numbers of scaleups, followed by Professional, Scientific & Technical, Wholesale/Retail, and Information & Communication. The Manufacturing sector saw the largest decline in scaleups over the total six year period – this is in line with wider trends in this sector – however the number of scaleups in this sector increased slightly between 2018 and 2019. 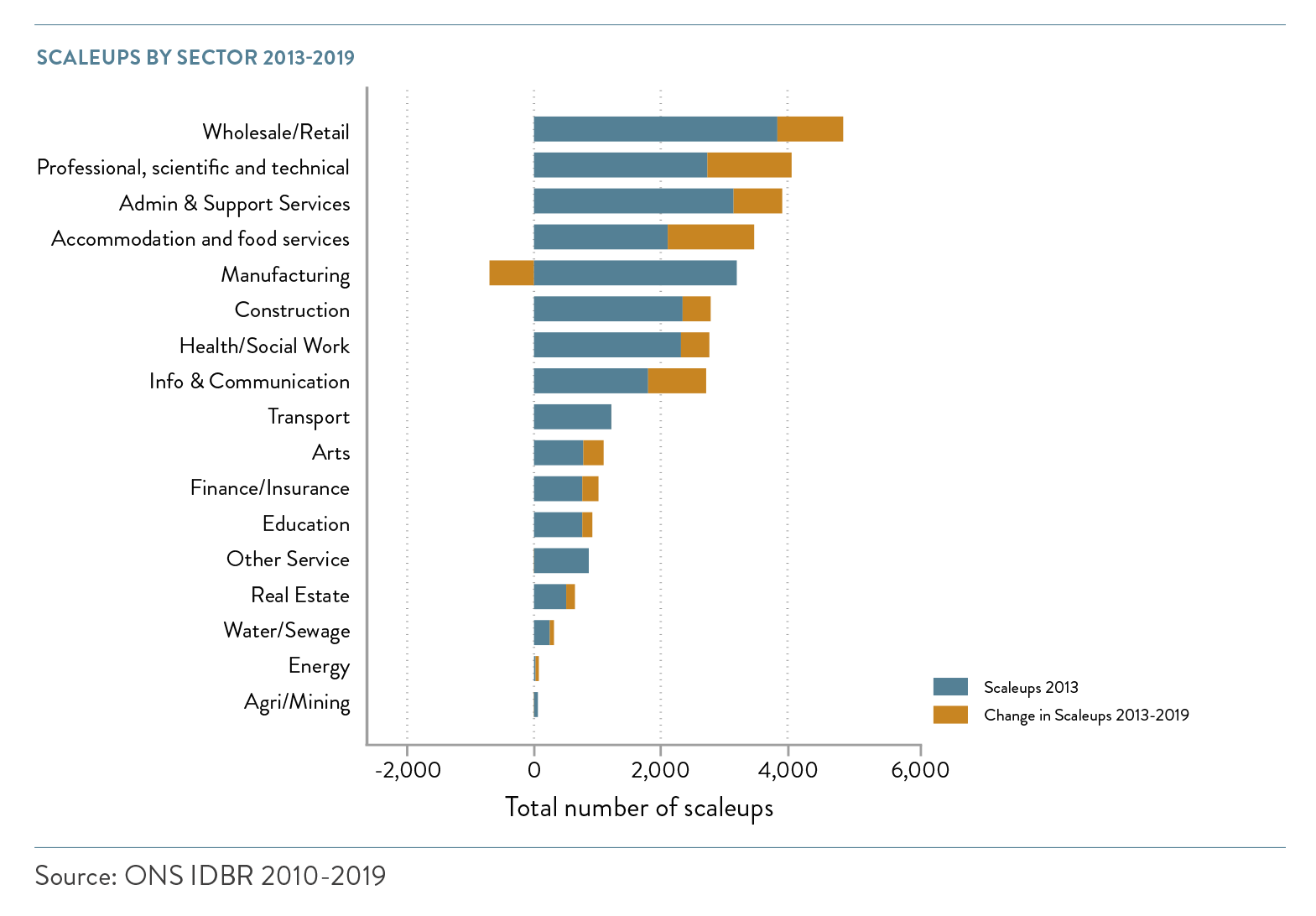 Scaleups continue to be more productive than other UK businesses across almost every sector of the economy. While the productivity premium of scaleups across all sectors was 51% compared to 54% in 2018, the top performing sectors did significantly better in 2019. The sectors in which scaleups demonstrated remarkable productivity outperformance were Wholesale/Retail; Agriculture/Mining/Energy/Water; Construction; and Other Services. They were 163%, 141%, 98%, and 95% more productive than their respective peers.

In 2020, we identified sectoral clustering as a driver of scaleup growth. This is because having a higher proportion of firms in the same sectors can increase the sharing of knowledge and resources, which are key to a thriving scaleup ecosystem.

There is a positive correlation between having a cluster of businesses in a sector and having a cluster of scaleups in that same sector. There is however variation between sectors. In 2019, Manufacturing; Health/Social Work; Accommodation and Food Services; and Admin & Support Services were significantly more likely to have sectoral clusters which scale.

This year, for the first time, we are analysing the sectoral clustering of scaleups by region. This will help to inform local leaders on the sector clusters that are driving local scaleup growth. It will also assist in identifying potential vulnerabilities as sectors restructure during Covid.

The map below shows the sectors which represented at least 3% of the scaleups in each respective region in 2019. 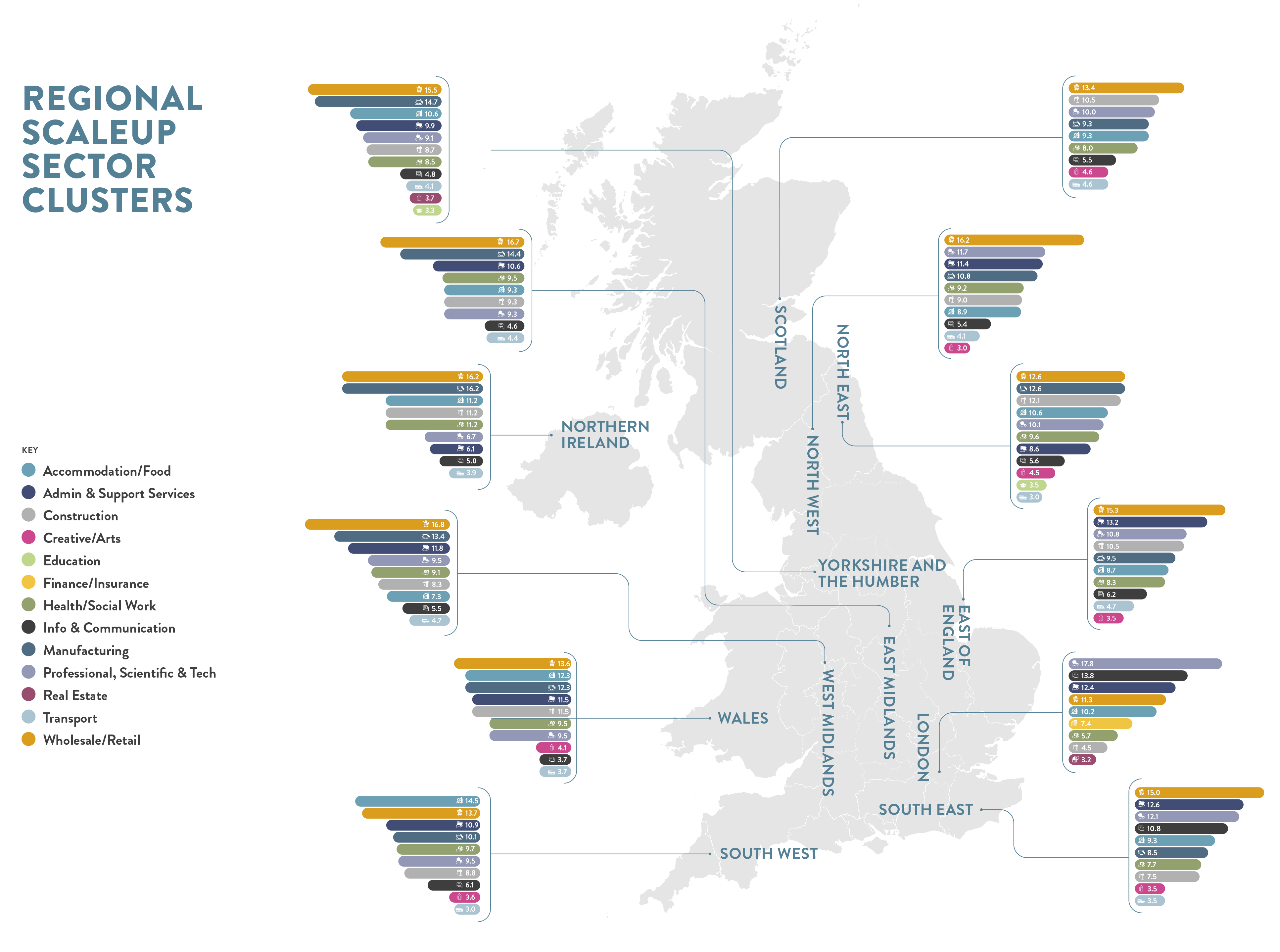 While Health/Social Work scaleups continued to be relative laggards when it came to productivity, they stood out here as the highest proportion of companies scaling by both turnover and employment (34%).

Regions varied on the proportion of businesses scaling by turnover or employment, owing to their different sectoral makeups. 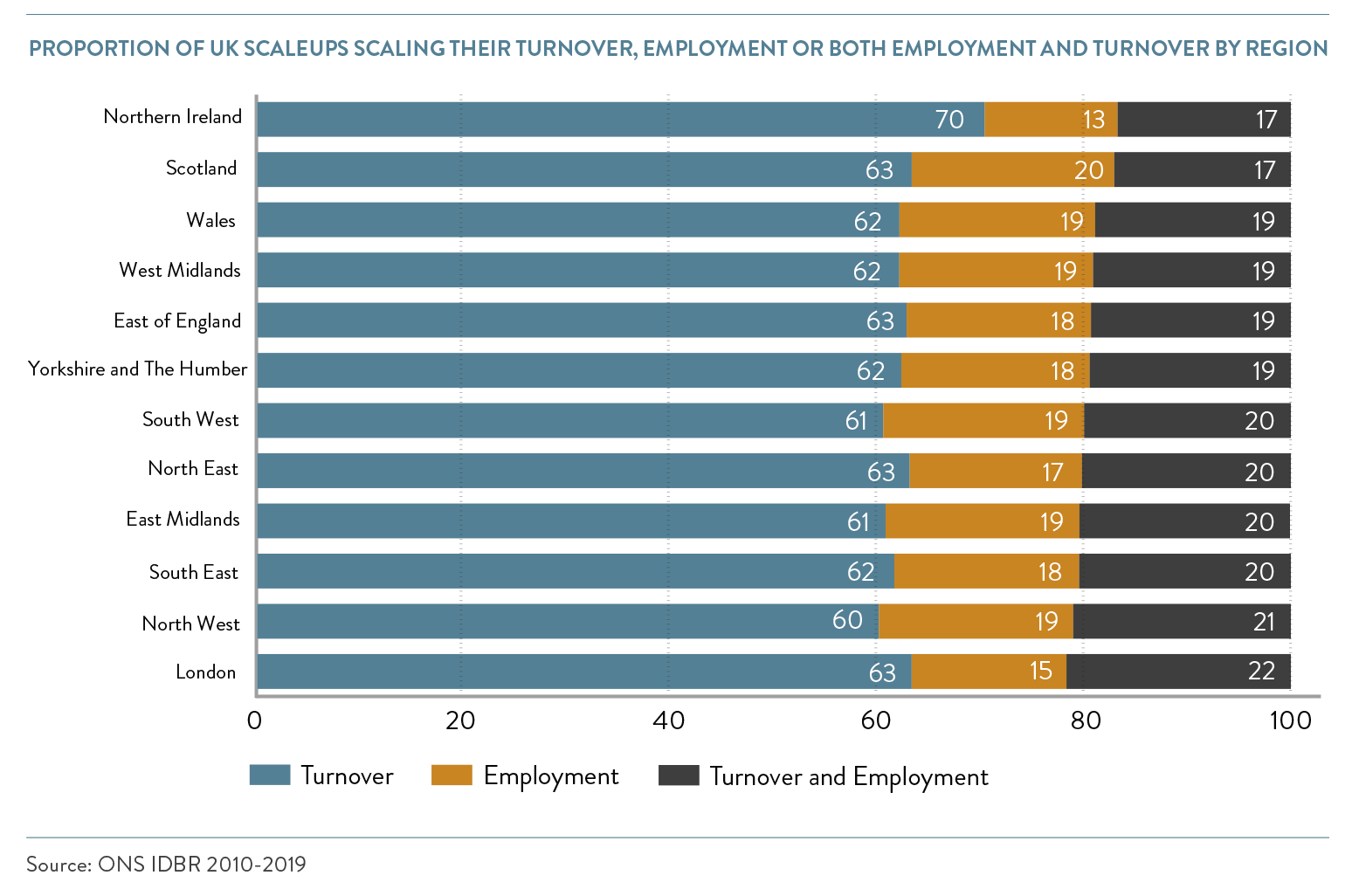 Analytical note: In 2021 the boundaries between 17 LEPs in England were adjusted to remove overlaps between areas that have existed since their formation. The analysis presented in this section reflects the new boundaries published by ONS in October 2021. This has resulted in some changes to absolute number and density of scaleups found in the affected LEPs and therefore in these cases local results are comparable with numbers published in previous Annual ScaleUp Reviews which are based on former LEP boundaries. Uk-wide scaleup numbers are unaffected by these changes.

Across the 38 LEPs and three devolved nations, we can now look at a six-year time horizon, since 2013, as well as the three-year rolling average.

This provides us with an insight into trends as well as a warning that in 2019 – despite scaleup growth in the majority of local areas across the 6 years – this growth has slowed down again in 2019 and needs careful attention.

Over the six-year monitoring period since 2013 (outlined in orange on the table below) we observe:

The LEPs/devolved nations with the 5 highest growth rates in employment scaleups for 2016-2019 were Worcestershire, Hull and East Yorkshire, Oxfordshire, Greater Birmingham and Solihull, and Liverpool City Region. When looking at scaleup density in employment scaleups, the top 5 LEPs/devolved were London, Oxfordshire, Thames Valley Berkshire, Enterprise M3, and Cambridgeshire and Peterborough.

Longer term growth trends in scaleups at a LEP/devolved nation level are illustrated in the maps below. Areas of a brighter green exhibiting higher growth and areas of blue showing slower growth or decline in scaleup populations. 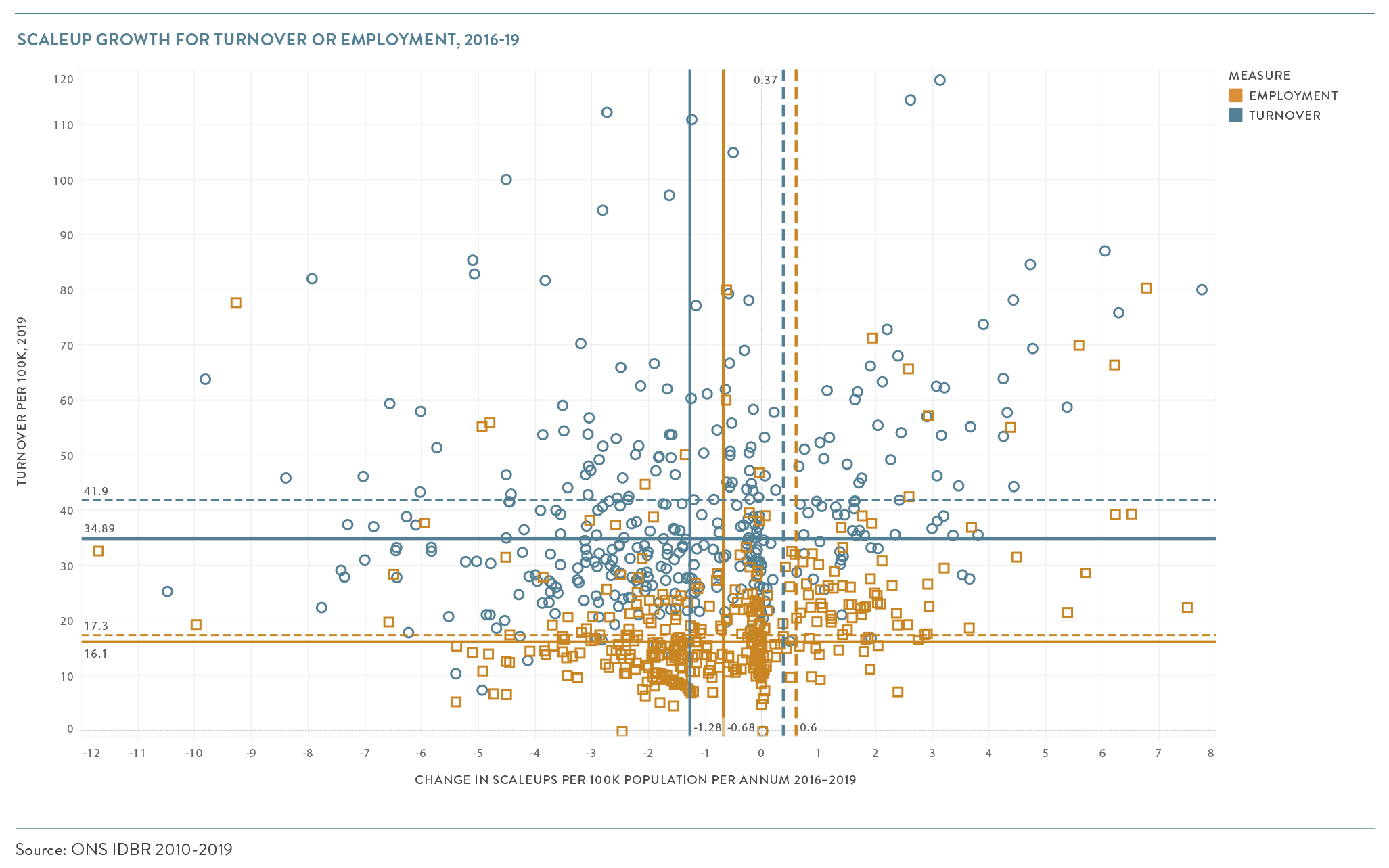 Fill in your contact details below and we’ll send you a monthly round up of our news and views
We use cookies to ensure that we give you the best experience on our website. If you continue to use this site we will assume that you are happy with it.ACCEPTPrivacy policy